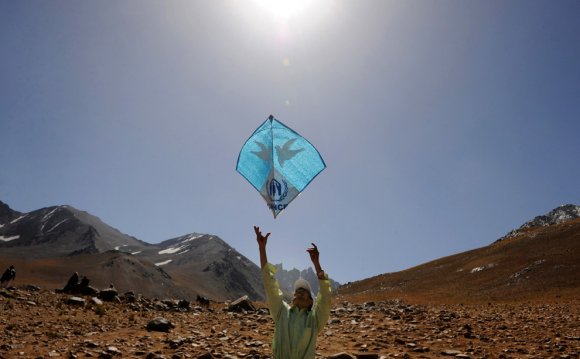 Kite flying in Afghanistan or 'Gudiparan Bazi' is a real fun and one of Afghanistan's national outdoor sports.

People have been flying kites in Afghanistan for more than 100 years. Flying kite is a common hobby of many Afghans throughout the country. Kite Flying in Afghanistan is a form of outdoor sport that many took into the status of art.

From the designs and sizes of kites to the making of unbreakable tar (wire), for many this became a matter of honor to compete in who's who among the best kite fighters in their neighborhood. This addicting outdoor sport absorbed many young Afghans, even during the war.

Before the war kite flying was part of Afghans national game. For those who missed out on this great Afghan past time, here is the nuts and bolts of Afghan kite and kite fighting in a nut shell.

Unfortunately kite flying in Afghanistan was banned by the Taliban. It was against the law for several years but after the collapse of Taliban government it has become legal again and everyone loves to fly kites specially on the weekends "Fridays".

The types of kites that people fly there is called fighter kites. It's because that when you compete with the other kites, you should cut the other kite and it's easy to move from one direction to the other.
Kite cutting is when your kite's string severs the string of your competitor, launching the loser's aloft and on the battleground, there is a fate worse than losing. If your opponent should find your kite, well, the humiliation is doubled. But until then, a champion is like a rock star.

The good season for Kite Flying in Afghanistan is the autumn season because of the good winds and most people get ready to fly their colorful kites including the kids and adults. As Kite flying is a favourite sport and everyone loves it and brings joy and smiles to the people, in the other hand kite flying sometimes can be dangerous too.
Many people are injured when they fall off from the roofs while chasing for free kites or when they lost concentration during a heated battle. Before the Taliban, people used to fly kites in a place called Chaman-e-Babrak [in northern Kabul], and the kite flying competitions were held there. Kids, teenagers, adults and older people from all over Afghanistan and Kabul City were getting togather for kite competitions, and they used to lay wagers on fighting kites.

For the first-time visitor, the skies above Kabul appears to be filled with fluttering birds or pieces of paper caught in the wind. A closer look reveals hundreds of brightly colored fighter kites soaring high into the air going one side to the other is really fun. When an opponent's kite is cut free, it flutters like a colorful, dying bird into the far reaches of the city.

Such kites are said to be "azadi - rawest, " or "free kite, " and can be reused by neighborhood children to fly another day.