What is Kite surfing? 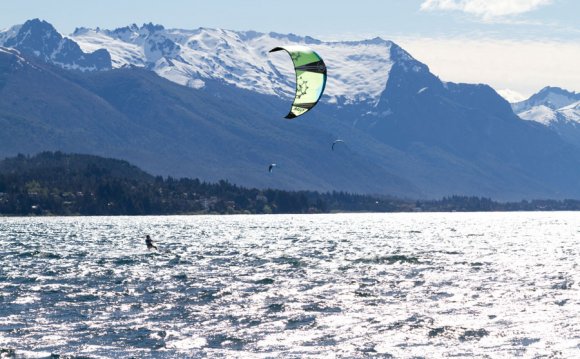 Learn kitesurfing with The Kitesurf Centre

Kitesurfing is a wind powered surface watersport using a kite and a board to move across the water.

Kitesurfing harnesses the power of the wind through a large parachute type kite to propel a rider across the water on a small surfboard or a kiteboard (similar to a wakeboard).

Although the name includes surfing, kitesurfing does not need waves, the wind is the only force needed to power you along. Flat water locations such as Camber are favoured by riders looking to perform freestyle as the water is smooth so easier to take off and land on. With the large range of conditions to ride in, whether ‘surfing’ in the waves, going for big jumps, taking out a GPS for a speed records, learning a new freestyle trick or on a long distance adventure kitesurfing never becomes boring or repetitive.

Kites with inflatable tubes are used to produce the pull from the wind. The inflatable parts of the kites help hold the shape and also allow the kite to float and therefore be re-launched from the water.

Various sizes of kites are used depending on the wind strength and size of the rider, anything from 2 to 14m2.

Since 2006 there has been a massive change in the design of kitesurfing kites, pre 2006 there was just one type of kite, the C-kite. C kites are named due to their very curved shape forming a letter C. In 2006 bow or SLE (supported leading edge) kites were introduced into the market, bow kites are named due to their flatter shape similar to an archers bow, SLE kites are named due to the bridle lines that attach to the inflatable leading edge and support its shape. Bow and SLE kites also have swept back wingtips which when combined with the flatter shape and bridle give the kite massive depower, very easy water re-launch and overall great improvement in safety and ease of use. Since the bow and SLE kites, many aspects of their design have been added to C kites and now hybrid kites are also on the market which incorporate aspects of both kite designs.

Most kite manufacturers now use each kite design in their product range, often a bow/SLE as the entry level/intermediate kite, a bow/SLE as the free-ride, all round kite and a C as the performance kite. C kites are still used by experienced riders due to their quick reactive turning, direct response and powerful turns however they have harder water re-launch and less depower than Bow /SLE kites.

What is temerity mean?

WHAT IS FREERIDE KITESURFING? [Surf-Store.com]