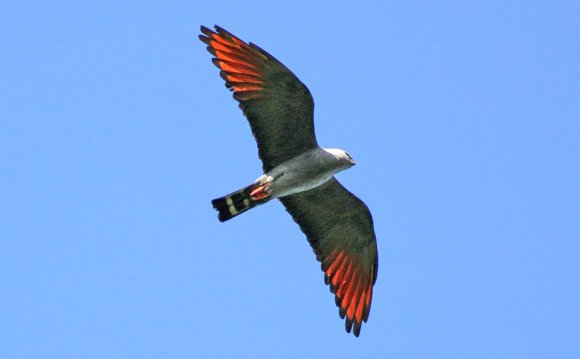 “Jorge”, the last Great Bustard of the province of Cadiz.

Mortally wounded by a turbine, he flew a kilometer or so, then collapsed.

Ornithologists, who protect the wind industry at all costs in the hope to land a monitoring contract, pretended Jorge hit an overhead cable.

Does this look to you like a wound from a collision with an overhead cable?

Jorge was hit by a turbine blade coming from underneath.

I asked for a copy of the autopsy, to no avail. The death went down in the media as caused by “a power line”.

Swifts, Swallows and other Hirundines seem to be attracted to wind turbines, like bats.

This rare white-throated needletail was killed by a small turbine in Scotland as twitchers were watching.

The small turbine that killed the needletail on Harris, one of the Hebrides islands off Scotland.

This one was cut in half.

If wind turbines attract insects, as scientists claim, then it is no surprise that they would attract insect-eating birds as they do bats.

That one was just knocked dead.

The strength of the blow depends on the part of the blade that hits the bird. Maximum velocity being at the tip of the blade, birds struck nearer the hub are less damaged.

“Almost one third of the (dead) birds were swallows and swifts, species that like bats hunt flying insects”:

Red Kites are attracted to wind turbines, and are thus particularly vulnerable.

This picture is from Germany, where about 200 – 300 red kites are killed by wind turbines yearly. The red kite population is declining rapidly in many countries: Germany, France, Spain, Italy etc. Even in the UK, where a tight cover up on bird mortality at windfarms is in place, some deaths by collision have been reported.

This one, wounded in Spain, was not so lucky: its death will be slow, and unless rescued by a charitable soul, its best hope would be to be eaten quickly by a fox.

Another one, left to agonise.

It’s a no-brainer: attracted as they are by wind turbines, open-space raptors such as eagles, ospreys, kites, falcons, harriers, buzzards, and vultures will be decimated where these machines are built.