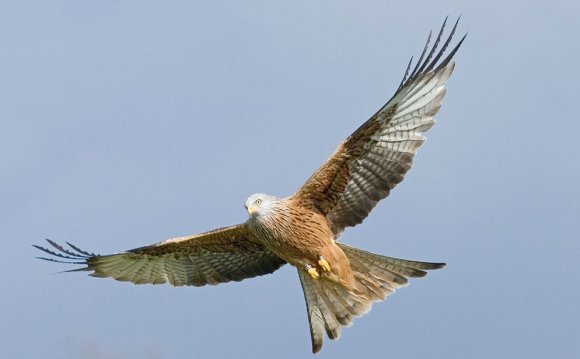 Bird lovers have been putting kitchen leftovers and even purposely-bought meat out in their gardens to watch the kites swoop down to feed a few feet from their house windows.

But bird experts say they should not do this because it teaches the kites to associate humans and houses with food.

Kate, of Maidenhead, Berkshire, described yesterday how the bird of prey, needle-sharp talons outstretched, swooped down on her helpless pet dog.

Blonde-haired Kate said the red kite tried to fly off with Vinnie during their morning walk in fields near her home.

"The bird came from my left-hand side and the claws went out and it tried to pick up my dog" said Kate, whose "cutie" handbag-sized dog weighs just four and a half pounds.

"The bird was huge - about five times the size of Vinnie. I'd seen its shadow in the sun as if it was stalking us as we walked across the fields.

"Vinnie was sniffing about in the grass a few yards from me wqhen it swooped down and tried to snatch him and fly off with him.

"It was about to sink its talons into Vinnie when I ran forward, shouting and waving my arms and stamping on the ground to frighten it off."

But as she and Vinnie ran back to her parked car, the bird swooped again.

"I picked up Vinnie but it wouldn't leave us alone. It followed us all the way to the car and kept coming close."

Though badly shaken, she dismissed it as a one-off...but when she took Vinnie back to the fields at picturesque Widbrook Common two days later, the bird attacked again but she managed to save her pet once more.

Kate, who's married to Mark, 35, wants to warn other owners of small dogs about the "death in the sky" threat.

Red kites have made an amazing comeback after being hunted nearly to extinction and are now a common sight across swathes of British countryside including the Chiltern hills not far from Maidenhead.

With an impressive 6ft wingspan, they soar high in the sky watching for an opportunity to swoop down, though mostly they feed on carrion such as road kill.

In many areas people have started to put leftovers from the table out in the garden for them to eat and they have become relatively tame - dozens can sometimes be seen over built-up areas including Earley, a few miles from Kate's home.

She said "I think there's not enough food to go round and these birds are thinking that moving meat is acceptable."

In 2008 another dog walker reported that a red kite had tried to snatch her pet as she walked in Ockwells Park near Maidenhead.

RSPB spokesman Tom Waters said it would be "most unusual" for a red kite to attack a dog, no matter how tiny the pet was.

But he added "They are opportunistic and can take small mammals."

Cathy Rose, acitivities and learning offier for the Chilterns Conservation Board, said red kites are not aggressive and the attack on Kate's dog was out of character for the birds.

"They should not be considered a menace. We hope people actually appreciate we have a rare and magnificent bird of prey in our area" she said.

But she appealed to home owners to stop putting out food for the kites because it encourages them into built-up areas when their proper place is in the open countryside.

Experts think there are now between 700 and 1, 000 breeding pairs of red kites in the Thames Valley area.

Cathy Rose added that red kites were "magical" but it was time to let them survive naturally without help from well-meaning residents.

Red kites were re-introduced to the Chilterns in 1989.

Last year children in Oxfordshire were advised not to feed the birds after a student at Icknield Community College in Watlington said he was scratched by a kite which swooped down and tried to grab his lunch.

But one of the men who helped reintroduce them into Oxfordshire has said he does not think it is a problem for people to feed them.

Illustrator and naturalist Nigel Snell was the regional co-ordinator during the reintroduction scheme.

"Any time anybody sees masses of anything they always think there are too many of them" he said. "We've only got to go a short way up the M40 and you'll hardly see any of them."

Cathy Rose said "People have been putting food out for red kites for years thinking that they are doing them a favour but what it might be doing is causing them to cluster in areas where perhaps they are not as welcome as they might be.

"Maybe they are breeding in areas where they are being fed at a level that is higher than the area would naturally be able to sustain.

"People start reading sensationalist news stories about children being injured by kites or kites coming down into people's gardens and we don't want the kites to be viewed in that way."

Local gamekeeper Joe Wasylowski said people should be fined for feeding the birds.

He said "I don't think people should be doing it like this. I think the kites should be left alone to get on with it like the rest of the wildlife."

Chilterns-based Coal merchant Richard Smith has fed the birds regularly for nearly a decade, but said he only put scraps out once a week so they do not become too dependent.

And Gill Smith, who also regularly feeds the birds, said "We don't feed them so much in the summer because there is more food about but in hard winters, it just sees them through."

Red kites all but died out in Britain because of persecution by gamekeepers in Victorian times but in the Elizabethan age they were one of the most common birds in the skies over London, scavenging on whatever they could find in the streets where people threw all kinds of offal and rotting meat.

Cathy Rose said feeding red kites is upsetting the balance of nature. "If we keep adding food to that balance then they will keep on breeding and we could potentially end up with more birds than the area could naturally sustain" she said.

"Then we start to get more issues with the birds taking opportunities to be predatory if there's not enough food lying around for them. Potentially this means people's pets, rabbits and guinea pigs in their gardens and possibly some of the ground-nesting birds out in the wider countryside that the RSPB and other organisations have been trying to increase in numbers."

Gemma Butlin, from the RSPB, said the increasing numbers were to be celebrated and that there was "absolutely no evidence to suggest that red kites have had an impact on the population of any small birds".

She said "I've never heard of a case of a kite taking a pet rabbit or guinea pig. They are big for a kite to take and there are much easier meals around in the countryside. The red kite has made a remarkable comeback thanks to a huge conservation effort by the RSPB and others.

"They are opportunistic hunters and they feed mostly on dead animals. They do capture some live prey, such as young gulls and crows and small rodents, but the most common live prey they eat is earthworms.