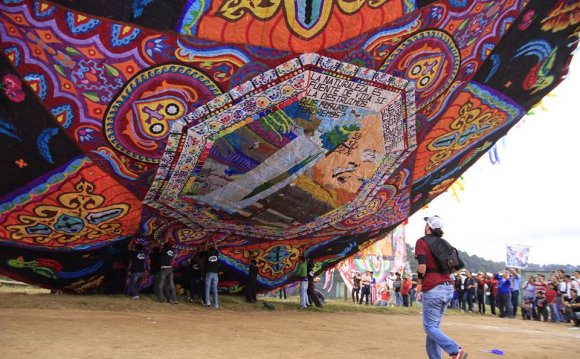 This Friday November 1st, or Day of the Dead in Guatemala, the municipality of Sumpango celebrated with their famous annual Kite Festival. Thousands of people from all over the country, as well as foreigners, travel to Sumpango on this day to see the magnificent, giant kites that various community groups from Sumpango have been working on for months prior to the event. There is music, food, drinks and dancing on this joyous event, which is the pride and joy of citizens of Sumpango. When you see the incredible kites, it is easy to see why.

The kites vary in size from 2 to over 20 meters in diameter. They are made purely of tissue paper so that, even though they are large, they can be flown when the wind permits. Community groups work for months, cutting and pasting different coloured paper to create priceless pieces of art. The kites often display important messages, including messages regarding caring for the environment and women’s rights. The groups who have created the kites are then the people that attempt to fly their kites in the later afternoon.

A women's group's kite flying in the afternoon wind.

Radio Ixchel, the community radio station of Sumpango, takes great pride in this event and broadcasts from the night before and throughout the day about the event. According to Angélica Cubur, one of the community radio volunteers from Radio Ixchel, and a great ally to Cultural Survival, explained that all of the youth who participate in the event spend the entire night before the festival working hard on all of the finishing touches. Radio Ixchel begins their broadcast the night before by interviewing participants who hurriedly prepare the large bamboo displays where the kites are mounted. There are even many people who are rushing to finish the beautiful kites at the last minute; often adding finishing touches right up until the kites are mounted.

The day of the event, Radio Ixchel continues their event coverage, interviewing people from the various community groups; foreigners who have come to see the spectacle; community leaders and the event’s organizers. This year was the first year that they threw their own party at the radio. A marimba band played music and many supporters from the community were in attendance. This party is meant to both help fundraise for the community radio station as well as to celebrate the joyous occasion. Radio Ixchel plans to continue the tradition of their party in following years, “expanding to invite tourists and leaders from other communities” to help with fundraising.

For anyone who is in Guatemala at the time of the Kite Festival, it is a must see, as pictures cannot do justice to the incredible detail in these kites. We congratulate Sumpango and Radio Ixchel on another successful Kite Festival.