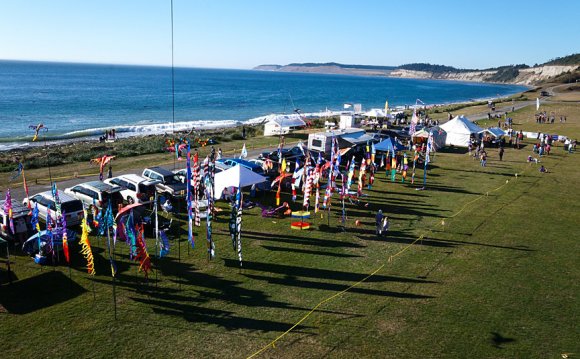 Whidbey Island in Washington State is known for a lot of things, including loganberry wine, lavender farms, Deception Pass and a naval air station on the north end of the island. Scores of kite enthusiasts descend on the island every September for the Whidbey Island Kite Festival, arriving via ferry boats crossing Puget Sound near Seattle and the Olympic Peninsula, or by car along State Route 20. Masters and novices alike elevate the art of kiting to higher levels with competitions, demonstrations and kite-making classes.

The Whidbey Island Kite Festival is held at Camp Casey Conference Center, just south of Coupeville in the middle section of the island. To arrive on the southern part of Whidbey Island, you will need to take a ferry from Mukilteo on the mainland, which docks in Clinton, then drive for about 22 miles north to Camp Casey. If you are coming from the Olympic Peninsula, the Port Townsend ferry dock is only about half a mile from the field where the kite festival is held. Driving onto Whidbey Island is possible if entering on the north end via State Route 20, where you can then drive south over Deception Pass, through Coupeville and to Camp Casey.

Obviously, the focus of the festival is kites - making them, flying them and competing with them. There are two main ascensions, one on each of the two weekend festival days. A specific type of kite is featured and the public is invited to fly that style at a specific time. Past kite designs have included delta, cellular, flat/bowed and sparless. Ground and air displays take place throughout the weekend, with kite-making classes for children as well as sportkite lessons and demonstrations.

The most anticipated event of the festival is the Whidbey Island Sportkite Championships, sanctioned by the American Kiteflyers Association (aka.kite.org). The competition occurs on both days, with individual, pairs and team events. The festival is co-sponsored by the Whidbey Kite Club (whidbeykiteclub.com), which promotes the sport throughout the year with monthly flying events and kiting information. A special treat each day of the festival for children under 10 years of age is a teddy bear drop. Hotdogs and sodas are available from a booth on-site, or deli lunches can be ordered ahead of time for delivery to the field.

If attending both days of the Whidbey Kite Festival, you will probably want to stay over on the island. For lodging as close as possible to the festival, the Fort Casey Inn (fortcaseyinn.com) is a row of waterfront cottages only one mile away, originally built as officer's housing before World War I. Numerous options are available in Coupeville, about four miles away, including cottages, bed-and-breakfast inns, cabins and small motels. The Coupeville Inn (thecoupevilleinn.com) is one of the largest, with 24 rooms and suites overlooking Penn Cove in the heart of the historic district.