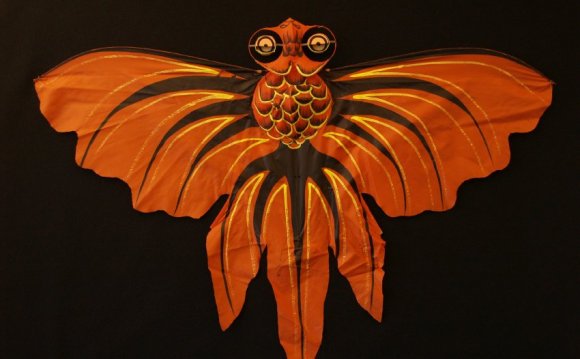 The kite is something children all over the world play with. But how, and where, was the kite invented? And was it always a toy?

The generally accepted wisdom is that the kite was invented in China. However it is also known that people in the South Sea Islands have used kites for fishing since very early times. They would attach bait to the tail of the kite together with a sort of net to catch the fish. This technique is still in use today. But the precise date when this started is unclear. By contrast there is sound documented evidence about the ancient use of kites in China.

It is likely that the inspiration for the kite came from ancient Chinese watching the effect of the wind on leaves, bamboo hats or sails. Certainly the Chinese were using wind sails before the kite was invented, and it is possible the kite came about when a wind sail became loose and floated up into the air still attached by one rope. But there are so many contradictory views that it is difficult to decide which is correct. However, whatever it was that inspired the kite, it is believed that the very first kite was made by Mo Di (468-376 BC), a famous philosopher who lived on Mount Lu (now the southeast of Qingzhou, Weifang, Shandong). Here he made an eagle with wood in three years. After his three years of effort he managed to fly it for just one day. So the kite has a history of some 2, 300 years. The story is that he passed his skills onto his student, Gongshu Ban (or Lu Ban) who improved on the design. Gongshu Ban made a kite in the form of a magpie, using bamboo and silk. With this improved design it is said that he managed to fly the kite for three days continuously.

Instead of being playthings, early kites were used for military purposes. Historical records say they were large in size; some were powerful enough to carry men up in the air to observe enemy movements, and others were used to scatter propaganda leaflets over hostile forces. According to the ancient book Records of Strange Events (Du Yi Zhi) when Emperor Wu di (464-549) of the Liang Dynasty, was surrounded at Taicheng,

Nanjing by the rebel troops under Hou Jing, it was by means of a kite that he sent out an S.O.S. message for outside help. However his plan failed when the kite was brought down by the enemy.

Both Chinese and Japanese learned to use kites for raising soldiers into the air as spies or snipers. Some old Japanese and Chinese prints show warriors flying over their enemies' territory. There is also a story from Japan about a famous robber named Kakinoki Kinsuke, who was supposed to have used a person-lifting kite to raise himself up to the roof of a castle where there were statues of dolphins made of gold. He was able to steal some of the scales from the dolphins and hid them. He did not escape the authorities, though, and came to a rather fatal end by execution.

There are many other interesting stories about the kite and its history. For example, General Han Sin used a kite to conquer an enemy castle. The castle was too heavily defended to risk an open attack, so Han Sin decided to breach a wall with a tunnel. He calculated the length of the tunnel by flying a kite over the castle walls and using geometry to figure the distance.

It is believed that kite flying became a recreation probably from the Tang dynasty when the royal family and aristocrats were addicted to it. It was said that the Emperor Xuanzong in the Tang dynasty once was deeply attracted by a kite named Eight Immortals Crossing the Sea flying in the air . The invention of paper made kites cost less and they quickly spread among the common people.


A 350m long kite with a dragon head
and centipede body

Kites also played an important part in superstition. It was believed, for instance, during the Qing Dynasty (1644-1911), that flying a kite and then letting it go might send off one's bad luck and illness. Consequently it would bring bad luck if one should pick up a kite lost by other people. This may be dismissed as superstition but may not be altogether without reason: think of the good it will do to a person, ill and depressed all the time, if he or she could go out into the fields and fresh air to fly a kite.

Kites spread across Asia, and became, and remain to this day, an important part of popular culture and custom. In Korea, it is a tradition to write the names and birth dates of male children on the kites and then to fly them. The line is then cut to ensure a good year by taking all the bad spirits with it. In Thailand, each monarch had his or her own kite which was flown continuously during the winter months by imperial monks and priests. They were also flown during the monsoon season by the people of Thailand to send their prayers to the gods. In Japan, windsocks are used in the shape of a carp, a symbol of strength of will and fortitude. These windsocks are flown on May 5th, Children's Day, as an inspiration to the children.

Kites were unknown in Europe for centuries until Marco Polo brought them back from his travels to the East. Then Europeans, and later, Americans used kites for all kinds of scientific and military purposes.

In China the kite is known as Fengzheng. This name came into use during the Five Dynasties (907-960 AD). According to the book Xun Chulu, by Lang Ying, during the Tang Dynasty (618-907), people began to fix on kites some bamboo strips which, when high in the air, would vibrate and ring in the breeze like a zheng (a stringed instrument). Since then, the popular Chinese name for the kite has become fengzheng (wind zheng). The kites made today in certain localities are fixed with silk strings or rubber bands to give out pleasant ringing in the wind.

The famous British scientist, Dr. Needham in his book 'A History of China's Science and Technology' describes kites as one of the major scientific inventions spread to Europe by China. It could be said that the kite was the original inspiration for man to fly, and so is directly the forerunner of the aeroplane. In the pavilion of aircraft of the National Aeronautics and Space Museum, Washington D. C., a plaque says, "the earliest aircraft were the kites and missiles of China". The kite also featured in scientific experiments, most notably in 1782 when Benjamin Franklin demonstrated that thunder clouds were highly charged electrically by flying his kite into the storm clouds with a conductive wire (nearly killing himself in the process!). This also led to the invention of the lightning conductor.

Flying fish in the sky over China