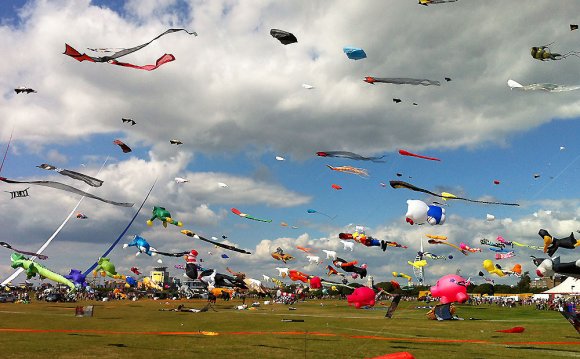 Last year August we went to the Portsmouth Kite Festival (again, third year in a row) and again we had a GREAT time. Blue skies, fair breeze, beautiful kites and lovely people.

We took a lot of pictures which i planned on posting as soon as we got home... Didn't happen but no worries, the time has finally come.

A big attraction was this huge (and beautiful) double dragon (two heads, facing one another). Haven't seen that one before. It took a lot of time, effort and planning to get that baby flying.

The star attraction of the show (to me) was this beautifully crafted dragon. Its overal shape was beautiful and very unusual but the artwork on the kites fabric was really, really special.

It's covered with all kinds of poetic shapes, patterns and figures. And to top it all of it flew really well. Something which isn't always the case with kites of this complexity. Unfortunately the creator is hiding his face behind his kite :-/
We already had a tyvec Edo portraying a little white cat ready to pounce. But due to its choice of material it was beginning to desintegrate... So i decided to make a new one out of polyester. Here is it's maiden flight :-) It preformed really well. I love the way the light shines through the fabric.

That is one of the disadvantages of tyvec. It blocks out a lot of the sunlight.
This is Garu's first really independant flight. We had him attached to a softkite. The softkite posing as his "parachute". This resulted in a kite that wallowed in the sky like a depressed whale on acid. So i cut him free and gave him a new tail. As it turns out, he flies really well solo! But i still want to make him a parachute. He's a skydiver see, he's wearing his skydivers goggles...

This is Pucca and Garu together at the Oostende Kite festival. Garu is still attached to his parachute/towtruck

Another big attraction this year was the appearance of "Team Mangalore"from India. They brought some beautiful kites with them. They represent Indian gods. Their faces are green because they are benevolent spirits. (?) They just look carsick to me but that must be because I'm an uneducated European prat.