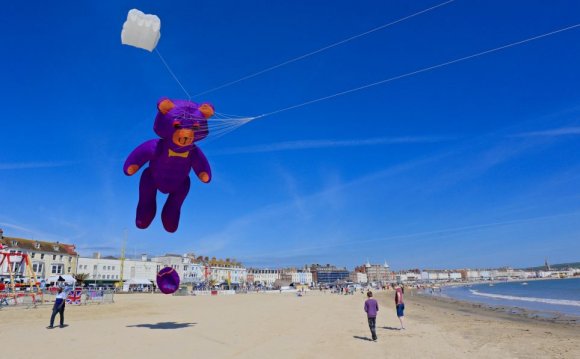 Monday was a lot better: wind a lot lighter, and coming off the water (as opposed to rolling over the hotels on the Esplanade, as it did on Sunday). T5 Cubans were the weapon of choice, and I think we pretty much nailed our routines.

Two other teams were present: Flame, the current UK dual-line team champions (including the pair Phoenix), and the , flying both as a 3-man team and as a pair.

And with three dual-line teams (and Barry) present, there is no way a mega-team doesn't happen. Seven kites this time, and we can truly say this was the most difficult mega-team flying we've ever done, due to the extremely blustery and turbulent wind. It really was a case of not losing concentration for even a fraction of a second ...


And in case you're wondering: no quad-line teams were present this year, as Weymouth clashed with Cervia.

In order to bring competition flying more to the attention of the public, STACK had decided to try out a fun competition: teams and pairs competing against each other, each flying one particular figure during their warm-up, and then flying one or more routines. Judging was done by the flyers of the other pairs/teams.

So nothing too serious, but simply to give the public a bit of a taste for competing in pair- and team-flying. Phoenix won, with a total of 84 points, just pipping Flame to the post. Although Flying Fish finished fifth and last, we're very happy with our score of 70 points, which was only 7 points behind the Airheads, which finished fourth; not a million miles away from the UK top!