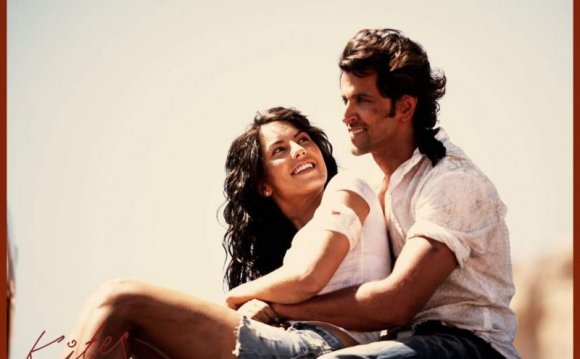 certainly did not soar last weekend in North America - what the heck, according to the actual figures released on Monday evening, it did not even gross $1 million even though it was the 10th highest grossing film in the continent.

Now the speculation has started whether Hrithik Roshan's underperforming film will good business in the mainstream theatres as a 90 minute version of the 130-minute long film Kites: The Remix retooled by the popular Hollywood film-maker Brett Ratner opens in a few dozen theatres this Friday.

And it will surely arrive with advertisements in mainstream publications that would have strong quotes from publications as The New York Times and San Francisco Chronicle.

And surely all this will help the film substantially unlike the international director's cut of the hit film My Name Is Khan which had only one quote, from LA Times, played in the advertisement when the film was released in New York at the arty Angelika theatre complex. The shortened version of MNIK bombed with less than $10.000 in the first week and plans to expand it nationwide were promptly nixed

But Kites could have a far better luck because it is a romantic thriller with an international cast and Ratner's name above the title.

Kites also received good reviews from such influential trade publications as Variety but what matters more are the reviews in the daily newspapers.

Never mind the shorter version, declared The New York Times while reviewing the original version, 'Mr Roshan requires viewing uncut: writhing on the dance floor or just gazing into space, the man was made to drive women crazy, one movie at a time.'

The Times also wrote: 'Directed by Anurag Basu with a finger in every genre jar, Kites caroms from car chase to shootout, from rain dancing to bank robbing with unflagging energy.

The movie, reportedly costing $15 million, 'is all completely loony, ' The Times added, ' but the stunts are impressive, the photography crisp and the leads so adorably besotted that audiences might as well check their cynicism at the door.'

On the West Coast, San Francisco Chronicle gave the film a hearty unwelcome.

Unlike in the Times where a third string reviewer weighed the film, Chronicle had its veteran and top reviewer Mick LaSalle judging the screen adventure.

'I saw the long version, ' LaSalle wrote, 'and it doesn't feel in any way stretched or dull. It tells a simple story - an almost archetypal story - but it does so with a lot of passion and technical sophistication.'

The end paragraph of the review could auger well for the shorter version, too.

'This is opera, ' wrote LaSalle. 'This is the big stuff, folks. This is a choir, a drum machine, a synthesizer, a 17-piece orchestra and an echo chamber all screaming "Love! Love! Love!" Go in smirking, but by the time it's over, you'll believe.'

But a leading newspaper in the South had strong reservations. The Austin Chronicle gave the film (the Basu version) two and half stars out of a total four. (The shorter version had not been screened at the time the original version was offered to the mainstream critics)

Kites, the first Hindi language film to open in more than 200 theatres in North America, will be playing in about 180 theatres its second week.

For the record, the Hrithik Roshan starring Jodhaa Akbar opened with a $1.6 million gross two years ago in over 100 theatres, ending its run with $3.4 million and Dhoom: 2 started with $980.000 and went on to gross $2.6 million.

According to the Sunday estimates the movie had grossed $1 million but on Monday the distributors had the actual figure which was about $50, 000 less.

If Kites follows the trajectory of most big budget Hindi films in North America, it could hit the earth with about $2.2 million. With a worldwide projected gross of $5 million, and a good run in Indian metropolitan cities, it could overall make some money, after factoring in ancillary sales including DVD.