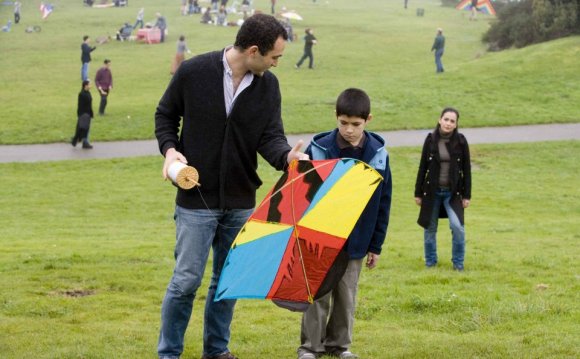 Author Khaled Hosseini has two novels still on the best-seller lists and a big-budget film based on The Kite Runner about to hit theaters, so it’s easy to forget that until 2004, he still toiled as a practicing internist in California. The Kabul-born son of Afghan immigrants who had immigrated to the U.S. after the Soviet invasion in 1980, Hosseini used his memories of the city and his experiences as an immigrant to write The Kite Runner and his second book, A Thousand Splendid Suns, which was published earlier this year to even greater acclaim. David Benioff’s adaptation of The Kite Runner hits theaters this week, and it's already generating considerable buzz. Vulture spoke to Hosseini during a recent visit to New York about the new movie, the experience of returning to Kabul, and what it takes to be the kind of novelist that set off a film-world bidding war with each new release.

The child stars of The Kite Runner were just flown out of the country to keep them safe. How serious were the threats?
There were never any threats. Nothing ever actually happened, but the family of one child did feel that there may be chances of reprisals against them if the film is shown in Afghanistan – or if the film is released and makes its way to pirated DVD. The studio wisely took that seriously instead of dismissing it and took steps to make sure the kids were out of Afghanistan before the film is released.

The other night Khalid Abdalla [the film’s lead] mentioned that his audition tapes were shown to you during the casting process. Did you have cast approval?
No. That was [director] Marc [Forster]’s call. He went to Kabul and found the boys and cast Khalid because he knew him from United 93. He did show me their DVD auditions, and we certainly talked about the actors. For instance, I told Marc that Khalid’s Farsi wasn’t very good; he had a long way to go. But to his credit, Khalid went and learned the language incredibly well. When I saw the audition for the actor who plays Baba, Homayoun Ershadi, I thought he didn’t really look the part; he was of average build and seemed a bit too slight. But Marc felt he had a certain quality and presence, and when I went to the set in China and viewed the dailies, I saw that he does bring a larger-than-life quality to the part. So Marc has an eye for these things. I don’t!

Have your novels been released in Afghanistan?
My work hasn’t officially been printed in Afghanistan, though, again, pirate copies are available. The book was “officially” published in Iran, but they never contacted me or anything, because there are no copyright agreements between the U.S. and Iran. So those Farsi editions have made their way to Kabul, as well as the English editions. When I was in Kabul in September, I saw both Farsi editions and English editions of the book. The bookseller apologized and said, “Your book is doing really well; we’re very happy with it.” [Laughs.]

Interestingly, these days The Kite Runner feels extremely topical in a different way, because it’s a novel not just about Afghanistan but also about the American immigrant experience.
I hear from non-Afghan immigrants — Africans, Indians, Pakistanis, Arabs in France — all the time. These people have had to redefine their lives, which is what my family went through when we came to the U.S. in 1980. My parents were reasonably affluent in Kabul. In the States we were on welfare, my mom became a waitress, and my dad became a driving instructor. That part of the American immigrant experience applies to people of any nationality.

I read that you hadn’t been back to Kabul before writing The Kite Runner. But you did go back before writing A Thousand Splendid Suns, right?
When I went to Kabul — weeks after I finished The Kite Runner — I met a lot of people, from all walks of life, men, women children, people from ministries, hotel doormen, shopkeepers. And I learned from them what daily life was like when the rockets were flying overhead. A doctor in a hospital told me that when the mujaheddin were fighting in the early nineties, he often performed amputations and Caesarean sections without anesthesia, because there were no supplies. A lot of those stories made it into A Thousand Splendid Suns.

I heard you also tried on a burka.
Yeah. I had done that as a kid, too, though.

You’ve noted that The Kite Runner might be the first Hollywood film ever made where all the major characters and the actors playing them are Muslims. It’s also the first Hollywood film that’s mostly in Farsi.
I think we’re in an era when we need films like this. For this film to be in Farsi is a real coup, because I think it will have mainstream appeal, which means that you will have average moviegoers being exposed to Farsi. There’s a scene near the end of the film where Amir, the main character, goes to the mosque and prays. I’m really proud of that scene, because it’s a scene of peace and supplication before the deity — and it’s not followed by violence. Usually when you see a scene of a Muslim praying in a Hollywood movie, it’s followed by a bombing. That act is performed billions of times a day around the world, and I’m glad we showed such a peaceful ritual in its proper context.