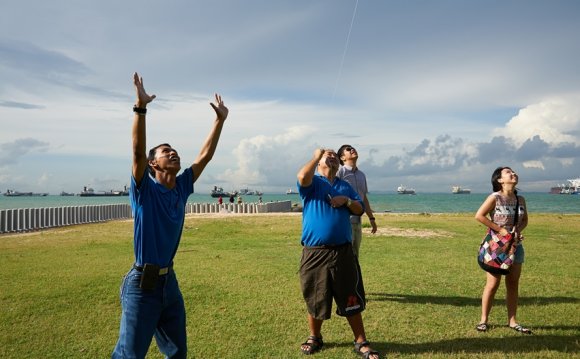 In far-flung rural Alaska, where electricity can cost as much as $1 per kilowatt hour—more than 10 times the national average, according to the New York Times—a wind turbine encased in a giant helium balloon is about to break a world record. The Bouyant Air Turbine (BAT) is about to be floated 1, 000 feet into the air in the name of cleaner, cheaper, and mobile energy. That single airborne object—sort of a hybrid of a blimp, a kite, and a turbine—will power over a dozen homes.

Floating turbines high up in the air, where wind speeds are greater, isn't a new concept. "It's known that wind speed increases with altitude above ground level, and power density increases with a cubic factor of wind speed, " Altaeros co-founder Adam Rein told me in an email. "Roughly speaking, a doubling of wind speed equates to an eight-fold increase in wind power density. Conventional turbine manufacturers are also trying to reach higher heights because of this fact—though not as high as our turbine."

Makani Power, which was acquired by Google last year, may have done most of the legwork in popularizing the high-altitude turbine. But Altaeros is looking to push the boundaries of where and how high-flying turbines can be deployed right now.

"The immediate benefit to our customers is generating low-cost, clean electricity in place of expensive, dirty fossil fuel, " Rein said. The company is aiming to deploy its turbines in remote areas, hard-to-reach areas that currently rely on expensive diesel generators or costly patchwork grids—in those markets, the BAT can be the cheapest, easiest source of power.

Altaeros floats its BATs using a helium-filled inflatable shell that resembles a soaring open-mouthed grouper. Since winds blow stronger and more consistently the higher above the ground you go, and the hovering BAT harnesses that gale and sends electricity down to earth through the high-strength tethers that also hold the machine steady.

"The BAT has an automatic controller, which adjusts the attitude and altitude of the BAT, through winches on the ground station, in order to maximize power capture, flight stability, and limit loads on the structure, " Rein claimed. "The BAT is fully capable of operating autonomously, without the need of a ground crew to launch or land the system." The device can deliver two to three times more power than a conventional turbine, Rein said. And it costs a lot less to install.

The company expects to be able to offer electricity for 18 cents per kilowatt hour; that's a lot more than the national average of 11.6 cents. But it's definitely cheaper than available options in places like Hawaii (where the average is a whopping 37 cents per kwh) and the aforementioned Alaska, and it gets pretty close to densely populated California, where a residents' average power bill comes out to 16 cents per kwh.

Rein noted that the BAT "will also remove the logistical headaches caused by complex fuel supply chains, or transporting and installing large wind towers over rough terrain." He also imagines it will be useful for industrial operations, like mining or resource extraction, and for acting as giant hotspots, too. "The BAT's shell also offers the opportunity to lift additional payload equipment—internet, phone, and imaging devices—that can offer customers an additional stream of revenue."

Obstacles remain, to be sure. "The largest barrier to implementation right now is the need for a product that is reliable in all weather conditions for long periods of time, " Rein said. He noted that the "FAA will play an important role in the approval of our product." It's already approved a draft policy allowing the BAT to take flight, but the prospect of a multitude of floating wind turbines sprouting up in remote areas around the nation certainly calls for a cohesive regulatory framework.

And do expect to see more skyward turbines in coming years. Some scientists have argued that we could meet the entire world's energy demand if we were able to harness the hugely powerful jet stream. That number's since been revised, but they believe there's a massive reservoir of usable energy just waiting to be tapped high up in the sky. Altaeros may be the first to bring some of it back down to earth.