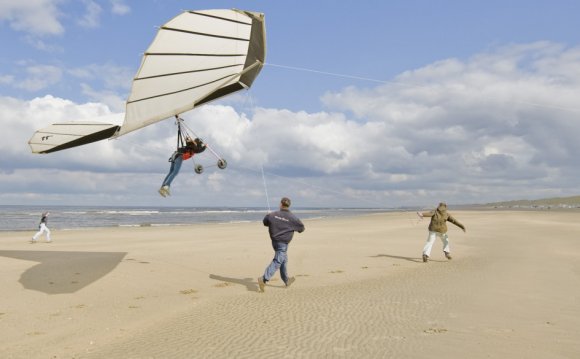 The engineer's suit is made from a 200 square foot 'kite', powered by motorised wings which 'amplify' Smeets's arm movements

Smeets takes a run-up for his test flight. The 31-year-old engineer claims that he 'flew' 300 feet and stayed in the air for a minute

Smeets' video has provoked controversy online, with many viewers claiming that it must be faked. The video shows a flight in a park in the Hague, which lasted about a minute.

The 31-year-old engineer claims that his 'flight' isn't a feat of magic - just clever engineering.

The wireless engines in the wings work as 'amplifiers' for Smeets's own arms, allowing him to flap wings that would otherwise be far too large for a single human.

The use of wireless tech and accelerometers has allowed Smeets to overcome a puzzle that has baffled inventors including Leonardo da Vinci.

The Wii motion sensors in the arms 'sense' Smeets movements, helped by an accelerometer from an HTC Wildfire S smartphone. The movements are transferred into Turnigy motors which give Smeets the power to move the 200 square foot wings.

'Ever since I was a little boy I have been inspired by pioneers like Otto Lilienthal, Leonardo da Vinci, says Smeets.

The project has taken six months, with Smeets blogging his progress and taking advice from fans.