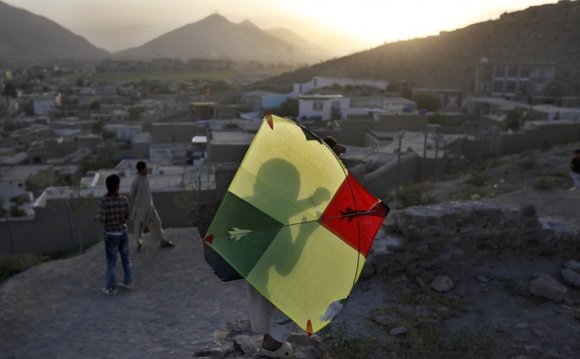 Did you know you could get arrested for flying a kite in Pakistan, after the pastime was banned in 2007, for safety reasons? But as long as you stay away from power lines, where is the danger in flying a paper kite, right? Believe it or not, authorities say kites kill people.

In Asian countries like India, Bangladesh, Afghanistan and Pakistan kite fighting is a very popular sport. The goal is to bring down your opponent’s kite by using an abrasive line coated with a mixture of finely crushed glass and rice glue to cut through its line or the soft paper skin. Some cultures use metallic lines or attached metal knives to hook and cut the opponent’s line. It takes a lot of practice and expert precision to maneuver a fighting kite, but winning a battle earns the victor the respect and praise of his peers. In Pakistan, the city of Lahore was considered the center of the kite fighting community, and even hosted the grand Basant Festival, where hundreds of thousands of kite flyers battled day and night for air supremacy. The festive event brought in people from all over Pakistan and beyond, but it all ended in 2007, when officials banned it, after several people were reportedly killed and hundreds others injured.

After kite-related tragedies were reported in previous years, Pakistani authorities decided to finally ban kite flying in 2007 and even arrested 1, 000 people threatening that anyone caught flying a kite could be tried as a terrorist. Sounds like a pretty serious charge for engaging in something as harmless as kite flying, doesn’t it? Only it turns out the glass coated lines used to slice rival’s kites sometimes sliced through bystanders’ and motorcycle riders’ necks as well, causing horrific injuries and even death. These sharp lines would fall across roads at head height becoming death traps for unsuspecting motorcyclists. Some fitted their vehicles with arched rods for protection against the sharp strings, but even so, deaths were reported every year. People also fell off rooftops and were electrocuted when their lines made contact with power lines, until authorities took action.

The Basant Kite Festival was originally banned in 2005, but following protests by kite flying enthusiasts and local manufacturers whose livelihood depended on the big event, the ban was temporarily lifted in 2007. Eleven people died and hundreds others were injured that year as a result of kite fighting, and Lahore hasn’t hosted Basant ever since. You can still see the occasional kite flying high over the city skyline, but those who dare engage in the pastime face serious consequences if caught. The Lahore Kite Flying Association has suggested creating designated kite-flying zones to minimize accidents, but to no avail . There are voices who claim the reasons for the ban have less to do with accidnets and more with religion, as extremist groups see the tradition as un-Islamic and threaten to launch attacks if Basant is held again.