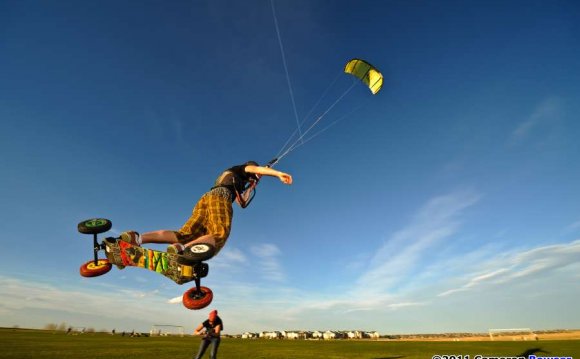 Kiting with a Mountainboard, Landboard, or Skateboard.
How to get started: Selecting a Kite and board.

If you don't know what landboarding or Mountainboarding is lets give you a glimps. Think BMX or Motorcross and now think of a skateboard designed to go anywhere and engineered to go totally off Road. All terain meaning grass, dirt, sand, rock, or concrete.

Landboards can be refered to as a few differenent names such as,

There wheels are most commonly 8" eight to 10.5" inflatabe tires. Trucks or normally adjustable and made of rugged.

Landboarding is great fun from cruizing down grassy slopes to the extreme rush of mountain and rock terain.

Like any sport there are differant levels to hang you hat.

It's Faster, Cheaper, and Easier to learn on land, than on the water. Kite LandBoarding has all the thrills of Kiteboarding without getting your feet wet! This fast-moving, fast-growing sport combines the best elements of skate, snow, all-terrain mountain-boarding (ATB) with traction-kites. Kite LandBoarding offers something for everyone, from cruising the flats, to big airs and tricks. Kite land-boarding is an ideal way to build skills for the water or just another great way to utilize the the versatile power of a kite. From 8 year olds to 65+, Anyone can learn who decides the want to.

Benefits of Kite-LandBoarding. Its all good!

• Landboarding lessons are cheap, less than 1/2 the price of a kiteboard lesson on the water.
• Landboarding gear (foil kite and All-terrain board) is about 1/2 the price of gear for the water.
• No Swimming skills needed.
• No thoughts about sharks, stingrays or jellyfish on land.
• Almost Instant gratification. Much faster and easier to learn on land.
• The skills you learn in a landboard lesson will transfer directly to snow-kiting and kite-skimming.
• Its HUGE Fun and a great way to take advantage of the wind and wide open spaces.
• For the brave... you will eventually learn how to boost high, spin, and glide in for soft landings.