Where was the Kite invented? 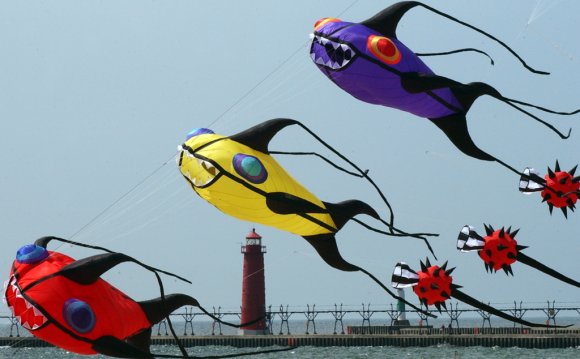 KiteOldest known heavier-than-air craft designed to gain lift from the wind while being flown from the end of a flying line, or tether.

Over the millennia, kites have been used to ward off evil, deliver messages, represent the gods, raise banners, discover natural phenomena, propel craft, drop propaganda leaflets, catch fish, spy on enemies, send radio signals, measure the weather, photograph the Earth, and lift passengers skyward. Modern kites are flown mostly for pleasure and sport, in addition to being a folk form of artistic expression. The kite was the ancestral aircraft that launched manned flight.

Nearly 3, 000 years ago the kite was first popularized, if not invented, in China, where materials ideal for kite building were readily available: silk fabric for sail material, fine, high-tensile-strength silk for flying line, and resilient bamboo for a strong, lightweight framework. The earliest known Chinese kites were flat (not bowed) and often rectangular. Later, tailless kites incorporated a stabilizing bowline. Kites were decorated with mythological motifs and legendary figures; some were fitted with strings and whistles to make musical sounds while flying.

After its appearance in , the kite migrated to Korea, Japan, Myanmar (Burma), India, Arabia, and North Africa, then farther south into the Malay Peninsula, Indonesia, and the islands of Oceania as far east as Easter Island. Since kites made of leaves have been flown in Malaya and the South Seas from time immemorial, the kite could also have been invented independently in that region.

fighter kite© Eden MaxwellOne ancient design, the fighter kite, became popular throughout Asia. Most variations, including the of India and Japan, are small, flat, roughly diamond-shaped kites made of paper, with a tapered bamboo spine and a balanced bow. Flown without tails that would hinder their agility, these highly maneuverable flat kites have a length of cutting line coated with an abrasive attached to the bridle (see below Aerodynamics), which is then tied to a light cotton flying line. Although the rules of kite fighting varied from country to country, the basic combat was to maneuver the swift kite in such a way as to cut the opponent’s flying line.

Europe and the West

Kite flying began much later in Europe than in Asia. While unambiguous drawings of kites first appeared in print in Holland and England in the 17th century, pennon-type kites that evolved from military banners dating back to Roman times and earlier were flown during the Middle Ages.