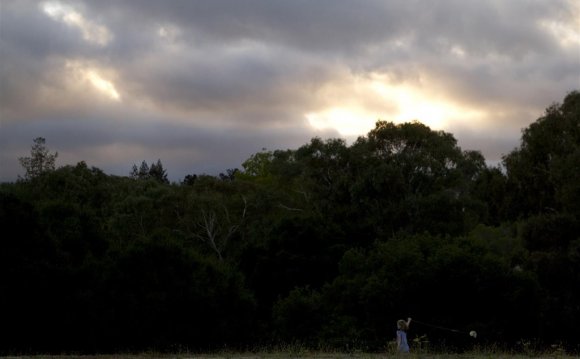 A kite prototype that could harness wind power is tested at a disused airfield in Bradwell, on the Essex coast. The kites are attached to hydraulic winches and fly up to 1, 000 feet in the air. Photograph: Sarah Lee

“Oh wow! Look at that, it’s really hoofing some power out now, ” beams Bill Hampton, looking up at his outsize kite as it swoops over a wheat field on the Essex coast. The purple prototype is, Hampton hopes, a step towards his vision of scores of huge kites flying over the sea in formation and generating clean, affordable electricity.

The test site for Kite Power Solutions (KPS) is an apt one for technology innovation, with the disused airfield lying in the shadow of one of the UK’s first nuclear power stations at Bradwell, and a few flat fields away from new wind farms whose blades turn slowly in the gentle breeze.

But, huddling behind a second world war pill box to observe the latest test flight, Hampton admits his motivation to found the company was more for the technical challenge than environmental awareness. He spent 18 years working in the exclusive super-yacht industry, creating the bespoke equipment that billionaires dream up for their huge boats.

“You’d sit with the designers and they’d say ‘we want a swimming pool but we want it to turn into a dance floor’, ” he says, explaining how he learned to build novel gadgets from scratch. “I then had a real moment – you are making toys to go on someone’s toy. It’s great when you are young, but why are you doing it?” He recalls working night and day with his team to get a yacht ready to cross the Atlantic in time for a party in the Caribbean. “I walked off that site and thought ‘I don’t want to do this again’.”

Now Hampton’s enthusiasm is for the high-tech kites his company is developing and he is being taken seriously: oil giant Shell and the UK’s Department of Energy and Climate Change have contributed to the £3m invested so far.

The ambition is to harvest the strong, reliable winds found offshore, and away from anti-turbine protesters. But planting tall turbines into the sea is expensive, both in the steel and concrete needed and the specialised boats required to install and maintain them.

Instead, Hampton wants to tether two kites to each mooring to capture the wind. Each kite flies in a figure of eight, drawing out the tether and generating power at the winch. When it has reached its maximum height – likely to be 750m – the kite switches to a hover-like mode, where there is little stress on the tether and it can be winched back in ready for the next run, using just a fraction of the power already generated.

Power is delivered continuously because one kite is generating as the other is winched in. Ultimately, the plan is to have scores of kites flying in formation, all automatically controlled using custom-made software.

Hampton calls the kites “wings”, due to their tilting control surfaces, and at full-scale they will be 40m wide with 2-3MW capacity, about the same as a 100m-tall conventional turbine. So far, KPS have tested prototypes of 7m.

They are testing each part of the development in turn, such as avoiding collisions and automated take-offs and landings. KPP employs 16 people, including experts in aeronautics, neural network software, mechanical engineers, atmospheric physics and sail makers.

Hampton is not concerned about storms: “The kites fly at 100-150mph, so storms are all in a day’s work.” But lightning is a worry, given each kite will have an on-board computer as back-up to ground controls, but he says the kites can be brought down to safety in minutes. If the wind drops away for a short time, a small propeller is being tested to keep the kite coasting aloft.

Mission control at the Bradwell site is a converted mobility bus, now crammed with computer screens, joysticks and doughnuts. Here Hampton explains that KPS are far from alone in attempting to develop kites and wings to lower the cost of wind power.

“If we were the only people doing it, I’d be really worried, ” says Hampton. The most interesting from an engineering perspective, says Hampton, is Makani, a project backed by the deep-pocketed Google. It involves a very high-tech wing collecting wind power at altitude using attached rotors, then cabling the power to the ground. “I desperately want them to get there, ” Hampton says. “It will help people see this is a viable market.”

Another company, Altaeros Energies, founded by the Massachusetts Institute of Technology, aims to use a tube-shaped helium balloon to suspend a wind turbine in the air. Ampyx Power is developing a glider and SkySails is focusing on a simple single-kite and winch system. There is even a company, Minesto, developing an underwater kite that flies in tidal currents to generate power, which has just been awarded €13m of EU funding for testing in north Wales.

“Offshore wind is currently too expensive, although costs are coming down through evolutionary change, ” says David Sanders, director of innovation at the Carbon Trust. “But wind kites have the potential to be revolutionary and bring a step-change reduction in costs.”

Sanders says backing such technologies carries a big risk, with $50-100m needed to get to commercial scale: “You need to gamble very large amounts of money, but if it works out you could make a huge amount of money. I would love to see these sorts of radical innovations get funding from somewhere, whether that’s governments or large companies. Not all of them will work, but some will and they are really needed.”

On KPS, Sanders says: “They are on track – but they have a long way to go.” The company is looking for $10m in 2016, says KPS business development director David Ainsworth, with the aim of selling their first commercial onshore systems in 2019 and having a demonstration array in the ocean before 2025.