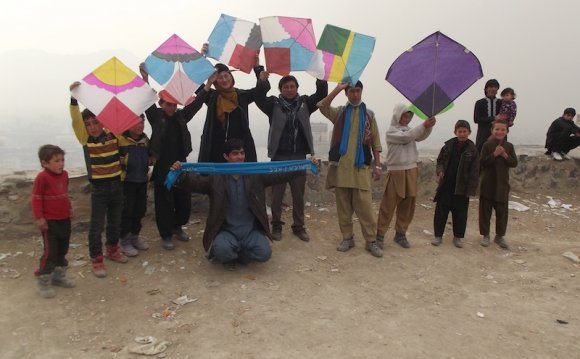 : The Kite
Gudiparan (translation: flying doll), come in different sizes – from about 10 to12 inches in diameter to the size of an adult. The average wing span on fighting kites is 3.5 to five feet. The shape is mostly diamond-shape. Gudiparan are made of thin paper with a “skeleton” of bamboo wood. This makes Afghan kites very light and flexible.

Tar: The Wire – Afghan kite wire takes hours to prepare. First shisha (a mold to coat the wire) is made, glass ground (to make the wire sharp for cutting) and mixed with an adhesive material and mashed rice to make a paste. The wire is coated with the paste, dried (often by hanging between two trees), and then wound around the drum (charkha). The coated wire is sharp—it is designed for kite fighting—and can take hours to make. Kite fighters often cut themselves with this sharp wire. To avoid this, many wrap a piece of leather around their index finger (called kilkak) to protect them.

Charkha: The Drum – The charkha is crucial during kite fighting where fast release of wire is critical. The drum must be lightweight, so it is made of wood.

Jang: The Fight – In order to have a kite fight, two kite teams have to be airborne simultaneously. There can be 25 or more kites in the air during a kite fighting tournament. As soon as two kite wires come in contact, the fight begins! The fight can last from a split second to up to 1/2 hour, or more, depending on wind, the difference in quality of tar between the two parties and whatever else is going on around them! Generally the team with more experience and patience wins the fight.

Azadi Rawast: With the Wind
Once a teams’ kite wire is cut and they lose the kite fight, the kite is released into the air and follows the wind. This is a great opportunity for someone to catch and own it. This is when you need a “kite runner!”

Sharti from the Block: The Champion
Most Kocha’s (a block or street) have a Sharti (kite fight champion). The title is given to the one who never loses a kite fight. Traditionally, shartis have a style that captures fans throughout the neighborhood. However, even shartis occasionally lose, and this is a “big deal” to the kochagi (neighborhood)


Islam, a major religion with believers throughout the world, also uses special titles. Because these titles are generally in Arabic (or, sometimes, in Persian), most are not well-known in the English-speaking world. Here are a few that are either well-known or becoming more commonly used: Capitalize when used as a title before a name, but lowercase otherwise. Religious leaders have traditionally been people who, as part of the clerisy mosque or government, performed a prominent role within their community or nation. However, in the modern contexts of Muslims minorities in non-Muslim countries as well as secular Muslim states like Turkey, Indonesia and Bangladesh, religious leadership may take a variety of non-formal shapes.

HAZRAT (حضرت) Descendants of the Caliphs

KHWAAJA (خواجه) Descendants of the Caliph

SAYEDA (سیده) A female descendent of the prophet Mohammad

Afghans flying kite to give away our location to bomber