I See The Kite flying 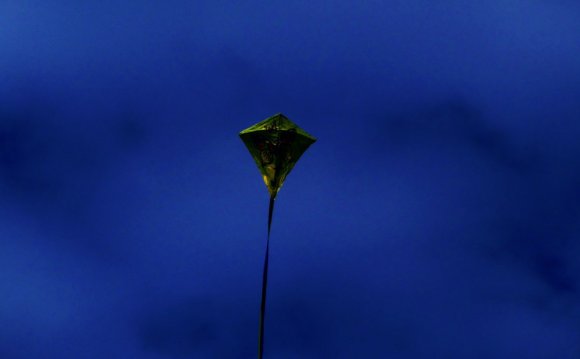 One Sunday the weather was so beautiful that I decided to go outside and fly the kite I had made. With the wind just right, it flew marvelously and I was able to let out every inch of string, so that the kite was high above the trees—and it was beautiful, with light shining through the tissue paper and the bright red tail trailing behind against the blue of the sky.

After flying it for a while, I debated about what to do next. Should I reel it in? Or should I yield to the quixotic notion to cut the string and give it its freedom? Now you should know that it had taken me quite a long time to make this kite, and today was the first time it had flown really well; but finally it seemed that there was something appropriate to the moment in the gesture of letting it go.

So I did. I cut the string.

And of course my soaring kite immediately started to sink, because a kite won’t fly without someone holding the string.

But then, as I watched . . . I was amazed to see the kite rise again into the sky and begin flying on its own, as if another hand had taken hold of it. What had happened, it turned out, was that a tree had caught the string, and the tree was flying the kite. I have had some beautiful moments of kite-flying, but that was the most beautiful of all, watching my kite fly after I had let go of it.

We read in the book of Ruth that the men in Naomi’s family—her husband and both her sons—have died in the land of Moab, where the family has been living. So Naomi decides to return to her own country of Judah. But her sons have married Moabite women whom Naomi loves. She begs both of them to return to their families, rather than traveling with her to what would be a foreign country for them. She says to them, “May the Lord deal kindly with you, as you have dealt with the dead and with me” (Ruth 1:8). One agrees, but the other, Ruth, who loves her mother-in-law very much, responds:

Do not press me to leave you
or to turn back from following you!
Where you go, I will go;
where you lodge, I will lodge;
your people shall be my people,
and your God my God.
Where you die, I will die—
there will I be buried.
(Ruth 1:16-17)

So Naomi and Ruth leave Moab together and travel to Bethlehem.

In the loving faithfulness of Ruth we see a letting-go and a dying to self. She will be in a strange land, far from all she has known. Nevertheless, she says to Naomi, I will not go my own way, but I will go with you. And into this letting-go of self the power of God becomes manifest. Ruth, the foreigner, the Moabite, of a people often seen as enemies of Israel, becomes the great-grandmother of David, and is one of the very few women mentioned by name in Matthew’s genealogy of Christ.

Ruth’s faithfulness becomes a participation in the divine plan. She lets go—and as it happened with my kite— another hand takes hold and something beautiful is brought about.

Even so in our own lives, when we act out of love, commending ourselves to God for the future which we cannot see, and trusting that our future is Christ, another hand, a divine hand, is there to grasp us. As for Ruth, so for us, the power of God is there, and in a surprising way, what happens is far more beautiful than when we keep hold of the string ourselves.