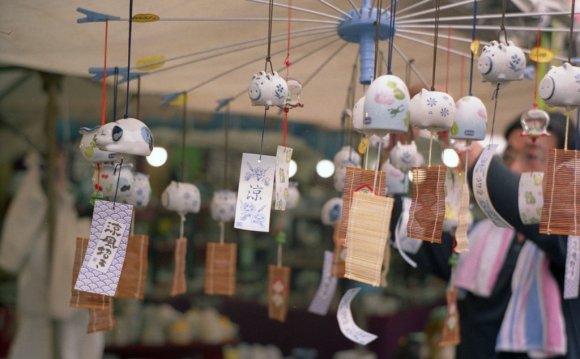 Japanese wind bells are called Furin; “Fu” is wind and “rin” is bell in Japanese. The glass Edo Furin wind bell is particularly beautiful and can be often seen during Japan’s humid summer.

Wind chimes were originally a fortune-telling tool in China. The Chinese hung a bell in the bamboo forest and made predictions based on the wind’s direction and its sound. However, since they’ve arrived in Japan through Buddhism, Chinese wind-bells have been used to expel any lurking evil spirits. Japanese people believed that nothing unfortunate would happen to those who lived within earshot of a wind-bell. During the 12th to 17th century period, towns and villages suffered epidemics of the plague. Only noble and samurai families were able hang wind-bells under the corners of their roofs for protection, because they were made with phosphor bronze and were very expensive.

In the 18th century, Dutch glass making techniques were introduced to Nagasaki, one of only four seaports kept open for trade during Japan’s seclusion period. It was the first time Japanese people ever saw glass. Thereafter, glass objects were shipped to the more affluent Osaka, Kyoto, and Edo (Tokyo) areas. People were instantly attracted to the beauty of glass, which prompted them to learn glass making for themselves. In the 19th century, someone came up with an idea for glass wind chimes. One of the characteristics of Edo wind chimes is that the glass painting is done from the inside in order to protect the colors.

Japanese people find the sound of the wind chimes very refreshing, something that must be encoded in their DNA! The hot and humid Japanese summer is sometimes unbearable, but even a slight chime sound can send a signal to the brain saying “It’s cool!” This immediately causes the entire body to lower its body temperature (Or so some people think)!

Edo glass wind chimes are perfect as Christmas ornaments and very popular in the West. Not only do the designs fit for the season, but the beautiful sound can also be quite merry, too!