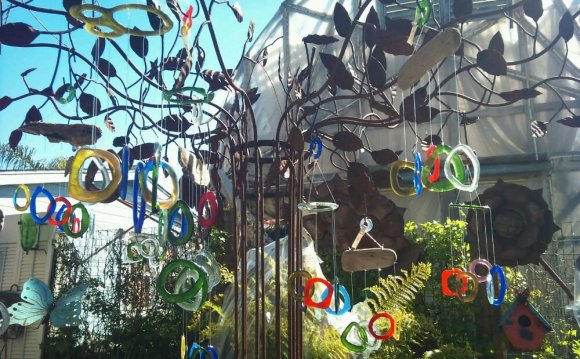 The History of glass craft in Japan dates back to 2000years ago. Wind chimes originated in China where they were use by fortune-tellers to predict one’s future according to the direction of the wind and the sound of the bell. They arrived in Japan along with Buddhism. Indeed, Furin used to be placed in each of the four corners of temples to protect them from evil. Wind chimes were also used during exorcism rituals as people believed that the sound of the bell would chase evil spirits away. Wind chimes also were regarded as a protection against natural disasters and when the inhabitants in the proximity of a temple felt protected when hearing the sound of the bells. During the Kamakura period [1185 – 1333] the nobility of Japan used to hand glass furin on their doors to avoid the “Yakubyougami“, an evil go said to be responsible of deceases and disasters, to enter their rooms.

Production of turin wind chimes started with different materials, shapes and colors. Glass craftwork spread to Japan from Nagasaki – one of the few places opened to foreign influence during Japans self imposed isolation from the rest of the world. Glass craftwork techniques were transmitted by foreigners in Nagasaki and quickly became popular in Japan thanks to expositions by Nagasaki artisans in Osaka and Edo (old Tokyo). At the time prices for glass wind chimes were very expensive as glass was precious due to expensive raw material and the lack of highly skilled craftsmen outside of Nagasaki.

It is during the Edo period that the glass craftsman Kazusaya Tomesaburo returned to Tokyo after training in Nagasaki for years. He became famous for making beautiful glass wind chimes of the best quality in Tokyo. From the end of the Edo period to the Meiji period Kazusaya and Kagaya were the main two producers of glassware in Tokyo.

When prices for glass started to decrease around 1887, furin wind chimes became more accessible for a larger part of the population becoming popular all around Japan. Peddlers would sell them on their way from town to town along with other wares.

Nowadays, it is still very popular to hand furin wind chimes from the eaves of a house or in front of a window. With the Japanese summer being really hot and humid the sound of the wind chimes allows to hear when a fresh breeze is coming. The sound of a wind chime also is a symbol of mental relaxation. The sound of wind chimes is a symbol for summer that often is featured in many commercials related to summer products.

We visited the Shinohara family that runs the Shinohara Edofurin company since 4 generations. When Mr. Shinohara blows a wind chime it looks very easy. When trying one quickly realizes that even the first step to make a round glass ball is very difficult. Mr. Shinohara explains that it takes an apprentice 3 years alone to master this first step and that it will require about 10 years to become a real master.

The bottom of hand blown glass wind chimes remains uneven by purpose. The glass stick inside the chime then not only makes a sound when hitting glass outside but it makes a much more natural and beautiful sound when rubbing along the ripples of the glass. Although the borders are uneven they get smoothened so that they would not be sharp and cut.

Shinohara Edo Furin employs a total of 8 craftsmen and women to make a wide selection of glass wind chimes of different shapes and motifs. Outside the busy season in summer you even might have to chance to visit them and make your own wind chime.