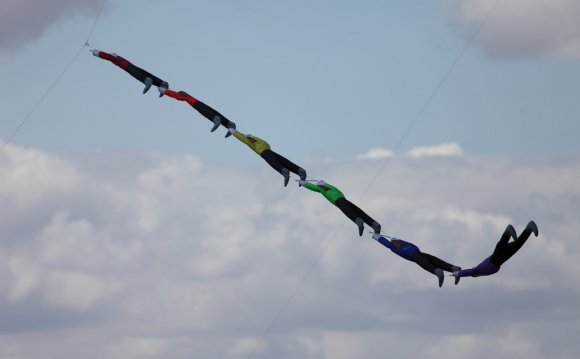 I took this on with a heavy heart; my good friend Clive Hollins would have wanted this so I agreed and I think was the right thing to do: I flew a 40m 7 MhZ radio antenna all day at the kite festival with a local operator (also a Clive) and Ron from the Duxford Radio Society. This is a new use of the kite for me and although I had run some tests I was nervous about hanging a long piece of wire in the sky when its busy with kites performing set pieces of one kind or another. At least the forecast was clear on the lightning risk!

It was a great demonstration of the kite as antenna lifter and the system deployed was simple, safe and effective with reports and call signs exchanged from France, Italy, Germany, Poland and Romania as well from all over the British Isles too. You can ‘see’ a kite from a long way off by radio!

From the start I knew this was going to be a Levitation day, the wind had a kick to it and was forecast at 14-15mph, too much for the rokkaku and proabably a bit gappy for the Explorer. It was the first kite in the air over Therfield Heath at 8.30 in the morning, I was keen to stake out the airspace I needed to place the antenna before the sky filled with all manner of skittish wind weeds.

After checking our CAA clearance for the day (600′- 200m, for daylight only) I got upwind of our pitch and paid out all the 250 daN dacron I had, about 200m worth, to find the smooth airflow and pick my working height for the day. I opted for about 100m of lead and launched the autoKAP rig..the line sagged horribly but it took the load and up went a D5100 using GentLed shutter relase and ClickPanPro rig control.

It weighed in at 1.2 kg, the wind was brisk so I thought I’d give the DSLR a go before the general public were at risk from the all too likely risk of tangle (or ‘wrap’ as I learned to call it today) and crash:

I had forced my hand on camera choice as I’d brought an Eos M with a flat battery. The D5100 set up is 400g heavier than the Eos M rig. This had to happen sooner or later, flying the DSLR is something I’ve been putting off.

As the site filled up I refined the layout I’d need to place the antenna using the KAP rig as a dummy load.

Once I’d figured out a spot that would keep the antenna as vertical as possible over the tansciever I screwed in a dog stake, tied off the kite and parked my car to protect the anchor from trip (in the shot above you can see the layout: my car is the outlier and our radio base is the right hand green gazebo) . The lead length over the attachment point was critical as the near ground airflow was very dirty, we were about 10m below a hill crest and other kites were taking quite a pasting from the ridge rotors, I needed to have the kite well above that.

The antenna wire was a lightweight insulated multi strand steel pre-cut to 40m long. It weighed around a kilo. By the time we’d tied it to a bungee at either end it was a bit short. The idea was to have the antenna wire under no stress so the tension was taken up at gust.

On the left the counterpoise is a copper pipe hammered into wetted ground, power is from a 24v truck battery, and on the right the yellow wire is the antenna. A loop of slack wire was tied off to the bungee…..and firmly anchored to a dog stake to stop the radio being pulled into the sky. Ron took charge of keeping the antenna wire clear of passers by as the wind slackened from time to time, he is a mountaineer so handling line is second nature to him!

The operator had to put up with a lot of background noise, a rising and falling antenna and the swings in the wind direction. An MFJ autotuner was used to help and the rattling relays let us know when the wire was below par.

The kite was almost downed by collision with at least 2 other kites but the power of the Levitation won through and thankfully the line survived the ‘wrap’ from smaller kites.

As the festival drew to a close I passed a summary of our contacts to the announcer who realyed the news to the crowd. In the internet age radio contact seems unremarkable but our achivement in raising a wire into the sky and broadcasting across Europe was a fitting tribute to Clive Hollins who loved radio and kites in equal measure.