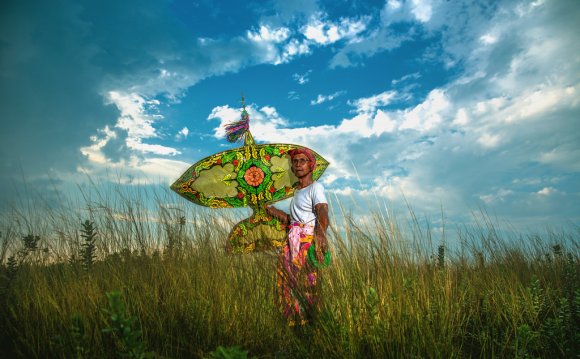 “Watching Father making kites, many things were deeply impressed in my mind unconsciously, like his posture when he cut bamboo or the way he spread colors over the pictures.” —Ha Yiqi, kite maker

In China today, kites are used for popular recreation and often considered fine art. Traditionally made from bamboo frames covered by paper and silk. Their designs and building styles vary from region to region. Swallow-shaped kites are popular in Beijing, while whistle-kites are associated with the city of Nantong in Jiangsu Province. Ever since kites were invented in China circa 220 BCE, they have been used for communication, to send military signals, measure distances, and even hold people aloft. By 900 CE, people had adapted kites for recreation such as flying kites to welcome the spring season during Qing Ming Festival.

Zhang Wenzhi holds up one of his banyao whistle kites, 2014. Photo by and courtesy of Nick Spitzer

Ha Yiqi 哈亦琦 is a fourth-generation kite maker whose family has been making kites in Beijing since the late 1800s. A talented artist, Ha studied both Western and traditional Chinese-style painting and was hired in 1980 by the newly formed Beijing Kite Association. After twelve years there, he started his own kite design company.

Through the years, Ha has been methodically working to document and recreate all 250 or so of his father and grandfather’s designs, which he plans to eventually donate to the government. In 2008, Ha kites were inscribed on the national list of intangible cultural heritage. To insure that the family tradition continues, Ha has taken his nephew, Ha Xin 哈歆, as an apprentice.

Zhang Wenzhi 张文智 is a kite maker from Gangzha District, Nantong City, Jiangsu Province. Growing up, he became interested in the craftsmanship of the region’s distinctive banyao (board snipe) whistle kite—large kites fitted with carved bamboo or gourd whistles that sound in the wind when carried aloft. After a career as a military pilot, he returned to Nantong and dedicated himself to researching banyao kites. For ten years, he visited and studied building techniques with local kite makers. Zhang promotes banyao kites through demonstrations, lectures, and by working to encourage kite-flying as a municipal activity.